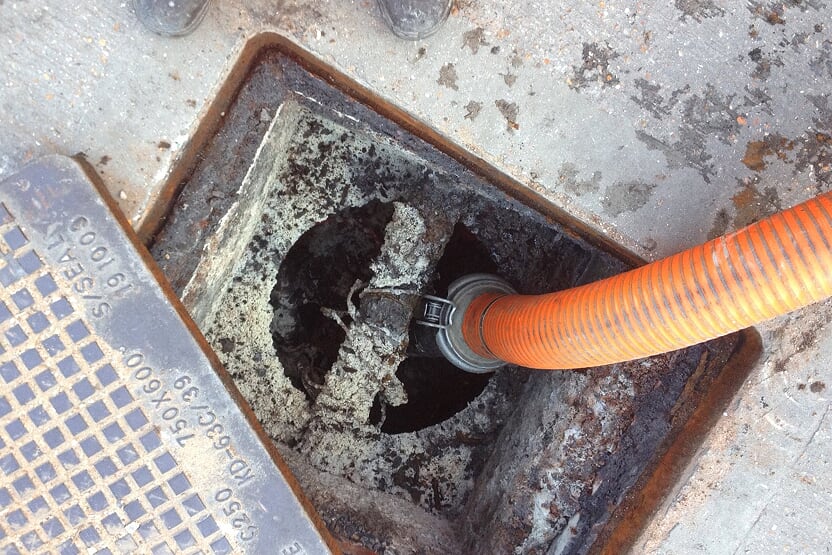 As stated before, grease interceptors are most often placed outdoors and buried in the ground due to their massive volume, but occasionally they are installed on the surface. As you probably already guessed, the primary difference between a grease interceptor and an under-the-sink grease trap is the volume of the tank. It’s not unheard of for a grease interceptor tank capacity to be as high as 5000 gallons, but the volume can be 750 gallons on the low end of the scale. Regardless of the size difference, they serve the same purpose, that is, to prevent harmful FOG waste from entering the Indianapolis sewer system.

A survey of the premises must be completed before installation can be started, considering many details. It must be correctly installed according to specifications or the efficiency can suffer greatly- up to a 70% loss can be experienced. Once the grease capturing system has been properly put in place, the greatest possible efficiency is around 85%. In any case, the most important factor in the efficient operation of any grease trap is regular, scheduled maintenance and service.

While the bulk of grease trap waste is removed by pumping, the various components must be hydro-jet cleaned. This literally blasts away any sticky residue on the sides of the tank and components. Usually, this only needs to be performed yearly, however, heavy buildup of residue may justify doing it twice per year or more. Of course, it’s better to hydro-jet the grease trap more often than not often enough, because there is a risk of your plumbing becoming clogged if that residue backs up. Not only that, but you also run a serious risk of contaminating the city sewer system, which could result in steep fines and other measures.

A summary of the pumping and cleaning process

First, it must be made clear that it’s never a good idea for untrained and inexperienced personnel to be employed to pump out and clean it. In fact, because of their lack of experience, the time used and final cost will most likely exceed what it would take for professionals like us to do it. And to be honest, grease interceptor cleaning is a dirty, nasty job that requires expensive, specialized equipment. We at Indianapolis Grease Trap Services are equipped with the latest tools and equipment to do the job fast and efficiently.

The first part of the cleaning process is to pump the entire contents from the tank and chambers. Grease and oil are lighter and less dense than water, so it floats at the top, while heavier food solids and crud sink to the bottom. This makes it important to be sure to evacuate it all, top to bottom, forming thick, sticky deposits. This requires the use of specialized pumps designed for such purposes, and are powerful enough to remove these deposits. The next step is to remove any sticky residues which have accumulated. Our hydro-jet equipment use a powerful stream of water at a pressure up to 3500 PSI. This literally blasts away the stubborn greasy deposits in no time at all.

Many of our competitors think they are saving money by not investing in expensive hydro-jet units. They simply try to scrub and scrape the residue deposits which just is not sufficient to perform the task. This leaves behind deposits that cannot be removed by hand and this reduces the efficiency of the system, increasing the chance of a mishap. Indianapolis Grease Trap Services always goes the extra mile to assure the integrity of your grease interceptor.

Keeping tabs on the waste content of your grease interceptor

The primary reason for an installation is to trap all FOG wastes from out of the passing water, which otherwise would contaminate the city sewer system with negative results. It chambers have the effect of trapping the greasy waste by taking advantage of the fact that it is not as heavy or as dense as water, so it will easily separate. A brand new or newly cleaned grease interceptor operates at its highest efficiency since it begins free from any waste which interferes with the processing. For this reason, it is imperative to strictly follow a regular schedule with regard to pumping and cleaning.

Now let’s talk about keeping an eye on the FOG waste levels. It is crucial to keep close tabs on the waste levels due to the fact that the Indianapolis health and safety code mandate that this level cannot go above 30%. The reason being that once the level goes beyond that limit, incidents of an overflow increase exponentially. Of course, a waste level of 100% will be met with a heavy fine and possibly other actions by the authorities. Whenever we service your grease interceptor, we make a record of the waste level and the amount of time that has passed since the last service. After a while, a trend will develop which will allow us to know in advance what the waste level will be at any given time.

GET A GUARANTEED CALL BACK
FROM THE OWNER